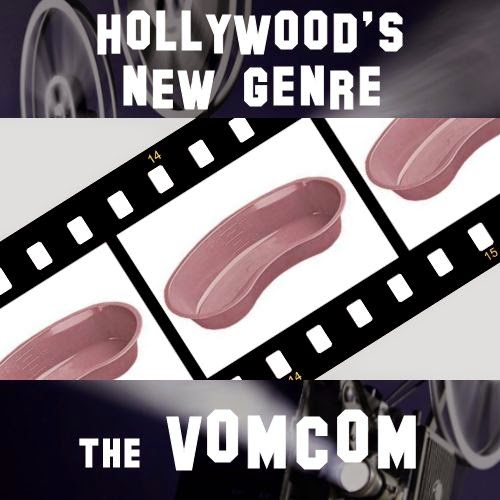 Or maybe that should be “Vomcom Reflux.” Judging by the amount of movie product out there, Hollywood’s latest genre is doing fabulously well.

In case you haven’t noticed, Hollywood thinks you are obsessed with excretory functions, and that you find them to be the height of entertainment.  Whether you really do or not, movie producers certainly believe you do, and they fear you will eschew motion pictures that fail to depict them.  An entire sub-industry has sprung up to serve this perceived consumer need.

I first wrote about this new movie genre, the vomcom, a few months ago.  I noted at the time that the wife and I watch upwards of four movies every week, and that about six months earlier, we’d begun to notice that at least one item on the excretory checklist would get marked off every single week in at least one of the four movies we were watching.

Now, you expect certain movies to hit some or even all of these buttons.  For instance, if you watch just about anything involving Seth Rogan, you’re going to get all four levels checked off really quickly (I think Neighbors holds the record for hitting them all in the shortest amount of time).

But comedies are one thing.  If you’re watching, say, a courthouse drama, do you really need to have all of those bodily fluids flung at you, in exquisite, uncensored detail?

Now, don’t get me wrong.  Bathroom humor, done right, can be hilarious.  But the setting is key.  A sophomoric R-rated comedy is what it is.  It comes with a set of expectations.  But in a straight-up drama where the target audience is other than adults aged 18-19, the expectations are, in theory, different—or at least they used to be.  For instance, do we really have to follow the guys into the bathroom and listen to their conversation at the urinal?  Can’t the writers come up with a different location for that scene?  Think of the money they could save by axing the de rigueur urinal set from the budget.  Hell, I don’t even like to talk to other guys at the urinal in real life, much less see it on screen.  But apparently Hollywood thinks that to make a realistic, hip, happenin’, 21st-century kind of movie, yes, these are things it now has to depict.

It was not always thus.  Until 1973, when Linda Blair found a whole new use for green pea soup, you could actually learn very little about human excretory and sexual functions from motion pictures.  All of these activities were conducted off screen and only hinted at in the dialogue.  I’m not saying it was a better day.  But it was different.

Which brings me to the The Judge, a movie I recently caught up to on the home screen.  This is one of those kinds of flicks where you just do not expect the writers to be unable to dodge the issue of these formerly unmentionable bathroom functions.  But, no, they dived right in—taking us with them for a full body immersion.  The film opens in a bathroom, where two characters are doing what they came there to do.  This being the case, technically speaking, viewers could already have checked off the “piddle” box even if matters had not proceeded further.  But proceed they did.  We get to watch as the lead character finds the need to express his opinion of his adversary by polluting the man's shoes in a spectacular, rude, and biohazardous fashion.

As the film unfolds, there quickly followed a vom.  And then another.  And then yet another, each presented in unflinching explicit detail.

After the third chunk blow, I turned to my bride and said words to the effect of, “Okay, this movie is doing pretty well.  Three voms and a piddle in one sitting.  Can we get a doody?”

Incredibly, without any warning whatsoever, that third item got checked off at that very second.  I won’t describe the scene but suffice it to say that my life will forever be divided into two parts:  the 57 years I spent without ever having seen that particular bathroom function performed on screen, and the rest of my life after that moment.

When the substance in question hit the floor, I pumped my fist in the air and yelled, at the top of my lungs, “Yes!”  I shouted so loudly that our cat Ellis, who was snoozing high atop the kitty condo dreaming of Little Friskies or whatnot, launched himself into open space like a tomahawk missile with a tail.  We didn’t even see where he came down, although we were able to deduce that he was still present in the house by way of the fact that there were no holes in any of the walls or windows.  But his sudden and vigorously executed departure caused the kitty condo to fly back, hit the wall, and bounce; it proceeded to topple into the fake ficus (I hate that fake ficus), which in turn fell into the standing lamp in the corner, causing that to fall.  It was like watching a Rube Goldberg contraption’s chain reaction.  With the span of ten seconds, our living room had been reduced to smoking wreckage reminiscent of the train scene in the final reel of The Bridge on the River Kwai, all because of Hollywood’s newfound commitment to excretory realism.

I swear I am not making any of this up.

By the end of the evening, the cat still had not come out.  The next day, he finally did emerge, but now he tip-toes around the house and carefully peers around every corner before proceeding like he’s afraid the Sasquatch is lurking, ready to stomp him.  This has caused my bride to stop speaking to me.  She blames me for scaring him and fears the trauma may have messed him up for life.  I can’t say her worries are misgiven.  But this is in no way my fault.  A stiff breeze scares that cat.  Okay, well, maybe my shouting was the proximate cause of the latest in a long series of shocks to his delicate system.  But I blame Hollywood.

I hate to complain.  But movie producers, I ask you:  can’t we just stipulate that people on occasion hurl, tinkle, go boo-boo, or worse—and skip past those parts?  Or at very least, can you write around them discretely, like your forebears did in the old days?  At least in straight dramas?

Please.  Have mercy.  The next time it hits the floor on screen, it’s gonna hit the fan here at home.  And I’m not sure either my cat, or my marriage, will survive it.

If you enjoyed this, I invite you to check out my novels.