No place in Hell for Fred Phelps 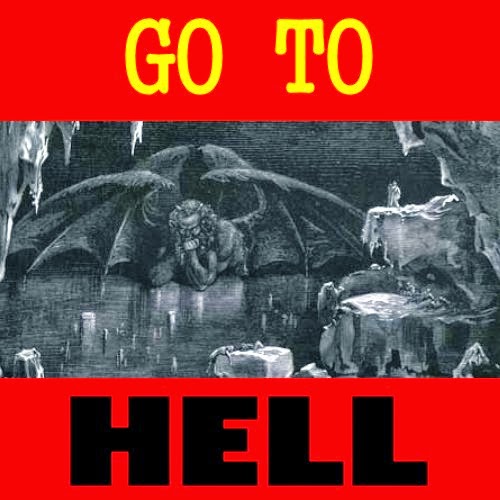 9TH CIRCLE, Hell (Gloomberg News) – Hell announced today that it can’t accommodate the soul of Fred Phelps, the late founder of the Westboro Baptist Church, and has refused admission.   The decision immediately led to a major rift in Heaven-Hell relations.

“It’s not that we don’t want Phelps,” explained the late Saddam Hussein, director of communications for Hell’s Office of Infernal Affairs.  “Far from it.  Leading souls astray, spreading hate in the name of the Almighty, defaming God himself—it doesn’t get sweeter than that.   Those moves are right out of The Dark Prince’s playbook, and Phelps was a master of the game.”  But Hussein explained that coming up with a reward commensurate with Phelps’ achievements has proved difficult.  “The essential problem is, we just don’t have a hole deep enough for the guy.”   Hussein said Hell administrators declined to admit Phelps and sent his soul back to Heaven.

“Well, this sure as you-know-what isn’t the place for him, either,” an irritated St. Peter stated in an exclusive interview with Gloomberg News.  “My book on this guy is so big, we have to move it with a forklift.  No way is Phelps passing through the Pearly Gates on my watch.”  St. Peter explained that to accommodate Phelps for the time being, Heaven has had to reopen Limbo.  “We haven’t used the place in decades,” he said.  “The air is a bit musty.  And we had to do some minor rewiring, replace some fuses and change out a few lights.  The latter was a bit on the expensive side, because all of the old cheap, energy-inefficient incandescents Limbo was originally designed to use are now in the other place.  But it’ll do for now.  We’ll keep Phelps on ice, in stasis, until we can figure out the next step.”

The Press Office of the Holy See at the Vatican said that Pope Francis will have no comment on the  controversy for now.  A spokesman, who was not authorized to speak on the record and asked not to be identified, said, “Meh.  What do we care?  The guy’s an abomination.  But the Holy Father’s jurisdiction only extends to the top of Mount Everest.  It’s in Heaven’s hands now.”

However, another usually reliable high-level source within the Vatican hinted that Pope Francis might indeed have something to say about it.  “His Holiness is a very compassionate and caring man,” the source told Gloomberg News.  “Normally he wouldn’t wish eternal damnation on anyone.  But he’s willing to make an exception for Fred Phelps.”  The source indicated the pontiff was relaying his concerns through channels.

Phelps and his Westboro Baptist Church gained notoriety over the last several years for its vehement,  hate-filled attacks on gays.   The church boasts that its members have picketed more than 53,000 events.  It is perhaps most infamous for disrupting the funerals of American servicemen and women killed in combat.  Protesters' signs typically display highly offensive derogatory terms, and bear messages declaring that God hates homosexuals and that He punishes America for tolerating them.  “Thank God for dead soldiers!” is one frequently-seen placard.  According to the Southern Poverty Law Center, Westboro Baptist Church bears the distinction of being “arguably the most obnoxious and rabid hate group in America.”  But in 2011, the U.S. Supreme Court upheld the group’s First Amendment right to picket.

“Phelps is tops in his class,” Hussein acknowledged.  “But we just can’t take him right now.”  Hussein pointed out that since the War in Heaven ended eons ago with the exile of Lucifer and his followers, Hell has undergone no additional construction.  He went on to say that the huge influx of souls that began in the mid-20th century has left Hades bursting at the seams, and it’s only getting worse.  “Recent U.S. military operations—particularly drone strikes and Navy Seal Team raids—have sent us so many new guests that it's pushed the overcrowding crisis past the tipping point,” Hussein said.  “And we just don’t have the engineering resources needed for us to expand and renovate.  Heaven is going to have to help us with that.”  Hussein urged the faithful on Earth to plead with Heaven to provide the necessary assistance.  “People should be concerned,” he said.  “Other Westboro members are getting on in years.  Barring a last-minute repentance, which seems unlikely, they’ll be down here sooner or later.  These are not the kinds of people you want us to send back.”

Phelps, 84, died of natural causes nearly a month ago.  However, Hussein explained that news of the problem with his admission to Hell is only now reaching Earth because his passing disrupted one of Hell’s primary lines of communication.  Word had to be routed through a secondary channel, the National Rifle Association News Office, which took longer.