Oh, my God. Is it happening? This was supposed to be fiction! 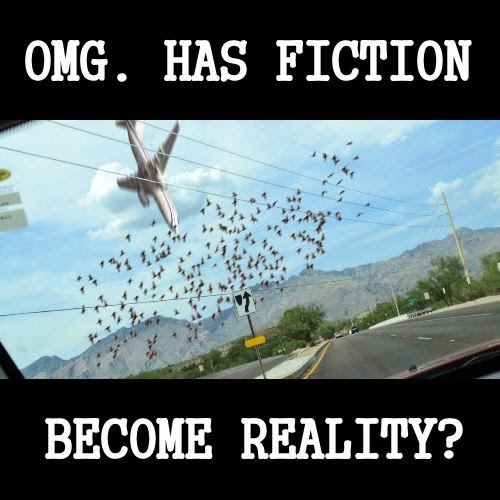 This novel doesn't have a ripped-from-the-headlines feel.  It's the other way around.  Real events are ripping headlines from the novel.  There were two more this week.

Jetliners falling out of the sky, under the control of homicidal maniacs?  Check.

Coast To Coast AM listeners heard these predictions just last month.  Readers of my novel, A Journal of the Crazy Year, saw them even sooner.

In February Coast To Coast AM host George Noory had me on the program to talk about these predictions, former TV news director and author to former TV new director and author.  Is the world going crazy and if so how bad will it get?  And could the zombie apocalypse really happen?  One of the things we talked about is a topic that George has some expertise on:  The disappearance of Malaysian Airlines Flight 370, a subject on which he has co-authored a book.  A lot of people, me included, suspect the disappearance could have been the act of a deranged, suicidal pilot.

The photo at right is from the back cover of the print edition of my novel.  Does the incident look familiar?  It's a depiction of a scene where an airline pilot commits an act of suicide/mass murder for reasons that were strictly personal, not terroristic.  In the plot it’s one of the first signs of the madness to come.  At the time, it was fictional.  The first published edition of the novel predated the crash of that Malaysian Airlines flight.  And then what do we have this week?  A confirmed incident of pilot suicide/mass murder in Europe.

Listeners to George's show heard it first that this could happen, and would happen if current trends continue.

What else did we talk about?  The idea in the novel that a zombie apocalypse could really happen was inspired by a real-life pandemic that struck a hundred years ago.  Some of the victims became hyperviolent.  The first symptoms manifested themselves in the form of a sleeping sickness—victims who fell asleep and never woke up.  No cause for the disease, dubbed encephalitis lethargica, was ever found.  No method of transmission was ever found.  The disease disappeared as mysteriously as it had arrived, without any human intervention, after claiming about a million victims.  My point on the show was that if you allow me the leeway to suggest the disease cold come back in a much more virulent form—which it certainly could, having struck twice before, with the second outbreak exponentially worse than the first—then yes, a zombie apocalypse like the one laid out in the book could happen.

And how’s this for sending a chill down your spine:  During its first outbreak at the end of the 19th century, the disease was known by another name:  The Living Death.

Well, guess what.  A sleeping sickness has now appeared.  Or reappeared, as the case may be.  It’s happening in Kazakhstan; the headlines are as fresh as your morning paper.  Does this sound familiar:  people are falling asleep.  They can’t wake up.  Doctors are baffled.  In the village of Kalachi, population 600, one person in four has been affected.  It strikes without warning—the victim can be in bed or walking down the street; it makes no difference.   Some victims report mental disorders, including hallucinations.   Now, “everyone is afraid of sleeping,” says one villager.

So far no one appears to have made the connection to encephalitis lethargica.  You're hearing it here first.  I did a great deal of research on the disease for my novel (the prologue for which is non-fiction) including time spent in a university medical library.   Trust me:  the last outbreak of this pandemic started out almost exactly the same.   Maybe this new eruption, whatever it is, will be less severe and will go away without claiming mass numbers of victims.   Maybe it won’t, and will act more like the second outbreak of EL, affecting upwards of a million people.  Some of those went violently psychotic, and tens of thousands had to be institutionalized for the rest of their lives.

Maybe it’ll affect more people, as depicted in the novel.  Let’s hope not; the book was intended as intriguing and thought-provoking but ultimately escapist entertainment, not as prophecy.  But it’s definitely true that readers—and Coast To Coast AM listeners—heard this vision of the future before it happened.

Not to alarm you—well, okay, maybe to alarm you a little bit—but the reality of what happened after the last outbreak of sleeping sickness is just as scary as the thought of a zombie apocalypse.  What followed was the Spanish Flu pandemic, which killed—you know what, I’ll let you look it up.

People are talking about this.  Last night (Thursdsay, March 26) sales of the novel peaked at #35 in its category.  Publishers Weekly described it as a “fascinating read” from top to bottom.  Take it from this starving novelist: Critical praise and rising sales are welcome.  Rising incidents of illness and psychotic violence are not.  Let’s hope this remains nothing but intriguing fiction.

Find out more about A Journal of the Crazy Year, see reader and critic reviews, and get a free download of that prologue here.
at 10:53 AM