Publishers Weekly gives nod to "A Journal of the Crazy Year"! 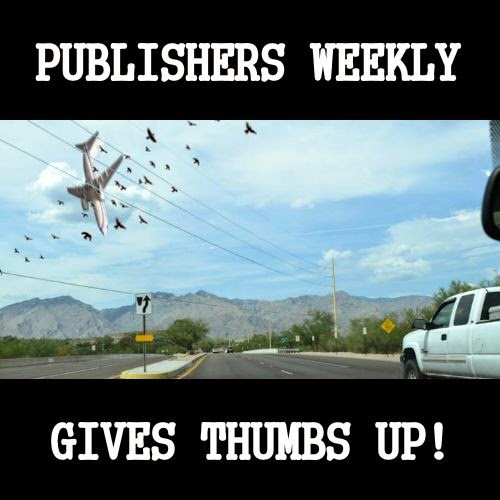 Lightning strikes again as another internationally respected literary reviewer adds its voice to the growing chorus of praise for a sci-fi/post-apocalyptic vision of the future ripped right out of this morning’s newspaper headlines.

The influential, internationally-respected literary reviewer Publishers Weekly opens its review of A Journal of the Crazy Year with this line:  “Fresh thinking and feeling animate this heartfelt postapocalyptic novel.”  After summarizing the plot, the reviewer goes on to say:  “The book is stuffed with untrimmable, character-driven, cogent dialogue, and Carr’s sincere investment in the concept of people groping their way through hell on Earth makes his story a fascinating read all the way to its chilly, barely hopeful conclusion.”

This comes right on the heels of a thumbs-up from the equally well respected Kirkus Reviews outfit.  Here’s some of what it said:  “Author Carr (Messages, 2013) does an exemplary job portraying the media circus surrounding [a] comet and the possibility of flesh-eating mobs.... Early on, Carr employs jet-black humor reminiscent of Vonnegut.... A truly unconventional ending makes for a worthy trip.  A great case made for the idea that the end isn’t nigh—it’s already here.”

Add that to what Fantascize.com said:    “Carr's impressive scientific and historical details elaborately frame the danger of the unknown. The origins of the comets and some cool references to Atlantis and the Genesis flood, interestingly make a point that history is about to repeat itself. There's education and mystification in the midst of the thrilling narrative, and they fit well.... There's a World War Z-feel to this journalistic approach, and Carr –a journalist himself – makes his voice sound introspective and personal.”

And add all that to what readers are saying:

"This was magnificent.  I know this will stay with me for a while.  It was certainly a page turner, so hard to put down."
--Amazon.com 5-star reviewer

"Thanks for no sleep that night when I found myself finishing it up at 4 am on a work night! And the ending was just so unexpectedly PERFECT."
--Amazon.com 5-star reviewer

When I began my literary journey two years ago, I didn’t really know whether I could write or whether other people might think so.  Now professional reviewers and critics are saying the same thing.  In short:  This not your father’s zombie novel.   You have never read a zombie novel quite like this one.   It has a fresh, innovative approach, an unconventional ending, and characters and dialogue that will stay with you.  It also has the virtue of having that “ripped from the headlines” feel.   The disease that inspires the novel was real, having mysteriously struck and then as mysteriously disappeared in the early 20th century, with no cause or cure ever having been found.  Who is to say it could not come back in even more virulent form?

The print edition of A Journal of the Crazy Year (with a new cover that I’m very excited about) will be available starting January 12.   (I will make an announcement at that time).   Meanwhile, if you have a Kindle or Kindle app, you can read it right now at a really low price.