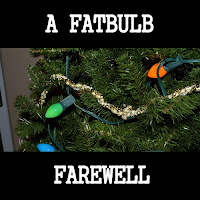 Well, you can’t tell it to look at the photo in the upper left corner of this page, but a crucial time was ticking down here when I was taking this photo.  The  “fat bulb”  light string depicted here was about to bite the dust.  But on the other hand, the white and gold strand of garland shown here was making its international debut.


Why are either of these events significant?  I have always associated “fat bulbs” with my childhood.  It is not Christmas season, in fact, until and unless that first string of fat bulbs goes up. 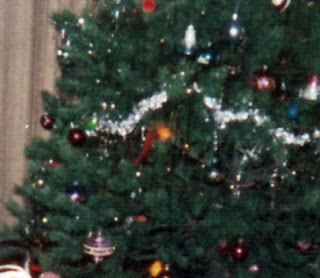 Sometime in the late 50's or early 60s the Marketers that Be came out with these tiny pinlight Christmas tree bulbs called “the mini.”  Today, alas, these things are the most popular.  They’re barely bulbs at all, really, just glass and metal reflectors wrapped loosely around some mysteriously-generated spark.  I can’t say precisely when such devices appeared—the history pages I consulted (and yes, such things exist, done by people with even more time on their hands than I have) didn’t say.  We need some Christmas tree historian to set the record straight and let us know exactly when the countdown to the end of civilization as we know it was embarked upon.  But embarked upon it was, and in my household the unthinkable happened at about 7:35 PM Saturday night.  The clock ran down to zero and my last strand of big fat bulb lights blew.  This was not something that could be replaced without creating a fire hazard—there actually was a shower of 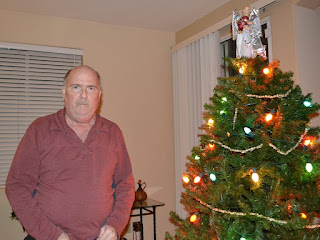 sparks as the thing went out .  And would you believe it—this was my recent and newest purchase of fat bulbs (otherwise known as the “c-7”)?  A search on the internet reveals that replacements are available in roughly the came c-7 size range, but they are LED’s, not incandscents.  Don’t ask me why it makes a difference, but it does.  I had gone on a long if not exhaustive search for fat bulbs in recent years and this was the last incandescent string to escape the clutches of the environmentalists who are determined to protect each and every one of us from all the dangers of that such devices present to the ecology and to the economy.  Apparently they burn too much electricity or some such damned thing.  Or maybe in today’s environment they’re just more expensive both to buy and operate and people are not willing to pay more for the privilege of stoking up a little childhood nostalgia.  Could be the skinflints among us are at fault.  Well, phooey on them, I say.

So, out the surviving strings of fat bulbs went, and in came the new, at 10 cents a bulb for a string of 50.  And then back those all went to the store be because the strands were set up to loop but not spiral – in other words, they could not be connected end to end to one another.  What’s the use of a light strand that won’t form into a strand?  Back to the store... only to find that replacement strands that would actually form into strands cost 4 times as much per bulb!  FOUR TIMES!  WTF?  The top replacement strand is flaky and may yet fail on us.  To be honest it’s a little ridiculous.  But now we are up and running.  And  yes, I am very sad not to have my fat bulbs.  I’m noticing that my ancient Kodak snapshots from my childhood didn’t do a very good job of capturing the “fat bulb essence” although I have some 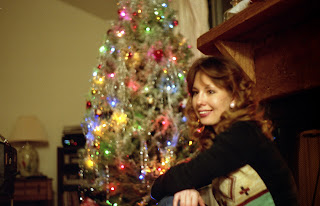 better shots from later in life taken with my Pentax SLR.

So, yes, I’m sad to see that what almost certainly will be my last Christmas tree will not have fat bulbs.  But, I’m not giving in to the inevitable.  This is NOT a plea for anonymous donors to send in strands of fat bulbs.  For one thing, we already have the tree up and we absolutely will not be dismantling it in order to replace the tiny lights with the fatter ones.  I hasten to throw these comments out because judging by the generosity I’m seen so far I can just imagine some of you raiding your own stocks of fat bulbs and strands and sending them to me.  And that is definitely not something I’d want you to do because, although Deborah doesn’t make a big deal out of it, she likes the pinwheels better than the fat bulbs. Who knew?

She’s also getting something else this year she’s always wanted:  Garland.  Me, I could not possibly care less about the type of Garland appearing on our Christmas tree—and no, I am not talking about the town in Texas.  Gold garland, blue garland,red garland, you name it—I turn my nose up at it.  I have nothing against it, just nothing for it.  This year at the  CVS Deborah suddenly dug in her heels and decided we will have garland.  Period. Well, okay, fine.  How much should we buy?

I challenge  you. Here is a package of garland. It’s 4 meters.  Is that enough for the tree you’re putting up?  Too much?  If too much, then too much by how much?  What color do you plan to get?  Available options were white and gold.  But wait!   More choices:  here's a red.  And now here's one that blends white and gold within the same strand!  More choices!  And here’s yet another choice:  fat strands, or thin strands!  OMG, we’re back to the light bulb conundrum!

Well, we didn’t figure it out on the first trip, but figure it out we did, and by the end of Sunday night we had a tree fully decorated with lights and garland, and had begun making strides hanging ornaments.

This is another point of potential conflict, by the way.  My favorite ornaments are the cheap, round, reflective thin glass ones, the kind that tinkle and break if the cat so much as glances in its direction.  Deborah favors “toy style” ornaments—little nutcrackers and drummer boys and that sort of thing.  We’re working it out, so far without therapy.  I image our difficulties will be settled as they always have been, and that is to say without serious bloodshed.  I qualify the statement the with the word “serious” because there always are one or two causalities among the glass ornaments thanks to the cats, and since these are her least favorite, and since the cats and her dote on each other and are fast allies... well I think you get my drift. 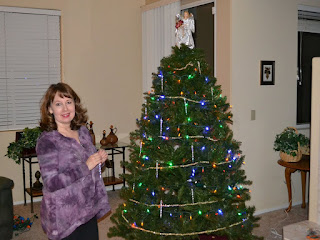 I do find it interesting that CVS managed to get all of our Christmas tree business this year.  I mean, they had enough supplies to outfit exactly one tree in our preferred style.   One.  We got their last usable strands of lights and their last garland.   As noted, she is a fan not of the big, fat, frilly, tasteless garland, but tightly wrapped, slightly understated garland. She hasn’t been able to find exactly what she wanted in, like, ever,  until this year, when she ran  into a CVS that had exactly what she wanted in the way of garland– tightly woven strands of gold mixed in with the white.  CVS had just enough strands to make it work – interestingly, this one particular store also had exactly enough Christmas lighting to make a tasteful a top-to-bottom covering, too.  So, it gets all our Christmas tree business this year.  How about that.

Let’s see, what’s on the social and medical front this afternoon –

Medically, it’s been relatively quiet.  Every morning when I wake up it’s sort of a race to see if pain will start setting  up in my side on and right above the spot where my kidney used to be.  If I get to the pain first and can administer my pain meds with alacrity, then I’ll have a pain-free morning, and that is a damned good thing.  Two delayed-release Oxycontin tabs does the trick on that.  But if I’m late, then there is going to be some pain in store, which will mean difficulty in doing just about anything for most of the morning. Fortunately, yesterday and today were good mornings—not completely pain-free but close it.  On a 10-point scale, about a 2.

Nausea, sad to to say, is raising its head again.  I had another 'bout of it last night.  So far its's nothing that seems too unmanageable.  I  have meds for this which work if I get enough advance warning.  But that is the key.

Socially, I have give a shout out to Mr. and Mrs. Joel and Lidia Allen.  The two of them made a very generous donation in honor of Deborah and me to the Interfaith Commnity Services Thanksgiving food bank.  This left me sort of speechless. We're not the kind of couple you’d think about as tending to attract anonymous donations of that type, or at least, we never have been before.  It’s a great cause, too.  Deborah tells me the fund helps provide meals for struggling families who are trying to put food on the table over the holidays.  The Allens also have the two of us on a prayer chain at their parish.  I was floored when I heard this.  I certainly don’t think of myself as being any particularly meritorious or deserving of such attention (although Deborah certainly is) and the thought that someone would do this in our honor just floors me.  It’s much appreciated.

This is by no means the first “prayer chain” that I’ve heard about, either, and I’m getting fan mail, much of which is coming in from total strangers. Most of that is in reaction to my fourth book, My Lifetime of Bizarre Coincidences and Strange Happenings, and I probably shouldn’t find it surprising given the theme of the book which is to try to make the reader understand and appreciate some aspects of life that modern societal forces try to suppress—such as, yes, the paranormal, precognitions, and other themes and issues falling along those lines that  might cause you to have a greater appreciation of the wonder of life.  These phenomena are very real and many reputable scientists believe they have meaning for the human spirit.  Grab a copy from Amazon.com;  I wanted to get the word out, so they’re priced about as cheaply as the vendors would let me (yes, they do make us set minimum prices).

That's all the news for now!