A Stunning Rush to Judgment—The Aftermath 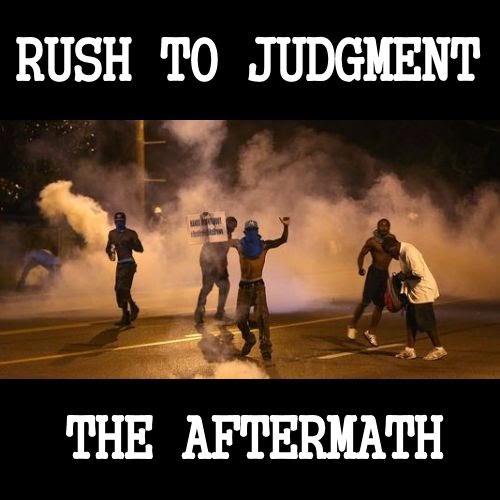 Now even some liberals are admitting the whole “hands up, don’t shoot” narrative was false.  So what have we learned?

In the immediate aftermath of the Ferguson shooting last summer, three things were abundantly clear.  One, the claim that Michael Brown had his hands up and was trying to surrender when a white police officer shot him had not been proved.  Two, that did not matter to protesters and agitators.  But most disturbingly of all, it didn’t much matter to the mass media, either.

Right after the incident, the Race Industry, which is a subset of the media’s Outrage Industry, went into full production.  Civil rights leaders and professional race agitators like Al Sharpton (the two groups overlap but are not identical) descended on the scene to stoke emotions, and they succeeded spectacularly.  The media were fully complicit in this, a fact that is in no way surprising given the media’s predilection for presenting stories designed to punch emotional buttons for the purpose of driving ratings and clicks.  But even so, the fact that so few so-called “mainstream” news reporters raised a hand and said, “Hey, wait a minute—shouldn’t we get the facts before we all run off half cocked?” was disappointing.

Some did.   TVNewser notes that in December, months after the shooting, Fox News conservative commentator Megyn Kelly warned that witnesses, as a general matter, are notoriously unreliable, and that the claims of some that Michael Brown was trying to surrender when he was shot might turn out to be false.  CNN’s Don Lemon also raised questions along the same lines.

Most didn’t.  Liberal Washington Post columnist and MSNBC commentator Jonathan Capeheart is one of those who bought the narrative hook, line and sinker.

The problem with both Kelly and Capeheart is that in expressing their views, we all knew where they were coming from—one was conservative, one was liberal.  Listeners and readers are entitled to assess such views by noting the lens of ideology through which they are projected, and they do.  In a way, that’s a shame.  A fact is a fact, and Kelly had some.  She and commentators like her were right.  Capeheart and his group were wrong.  It’s that simple.

A few days ago Capeheart admitted it.  He wrote a column stating flatly that “ ‘Hands up, don’t shoot’ was built on a lie.”  And then he went on to say that even so, the issues are real and the demonstrations should continue.  He is not wrong on either point.  But for his efforts to honest-up the movement, fellow liberals denounced him as a sellout.

Anyone—especially any professional journalist—who took the time to examine the actual facts in the aftermath of the shooting should have known that the claim was on shaky ground.  Witnesses claiming to have seen Brown with his hands in the air were not of particularly high quality.  The primary driver of the whole “Michael Brown was trying to surrender” mantra was Dorian Johnson, who was with Brown when he robbed a convenience store.  Activists are going to launch a national movement—and demand the imprisonment of a police officer—based on an unproved statement from a guy like that?  Yeah, and they did—with full media support.  When the family’s autopsy came out—which did not support Johnson’s statement that Wilson had shot Brown in the back—the Huffington Post ran a giant banner headline reading, “ARREST HIM!”  Hint:  Huffpo didn’t mean Johnson, even though some now feel he should be charged with perjury.

Some of us did notice the problems with the narrative right away.  Way back in August I penned a piece pointing out that not all the facts were in, and I asked, “Doesn’t that bother anyone?”  As it developed, not only did it not bother a lot of people, some were willing to admit out loud that the facts were not relevant.  One protester, when questioned about whether Brown really had his hands up, answered that it didn’t matter whether the claim was true because the image was just symbolic.

I would venture to say the facts mattered very much to Darren Wilson, who found himself under investigation for murder.  But that’s just me.

Actually, some facts were relevant—precisely two of them, and they are:  Live white cop, dead black guy.  Much was made over the fact that Brown was unarmed, but in the end even that did not much matter.  If you question my statement, just look at the case of Vonderrit Myers—a black man shot to death in the act of trying to kill a white police officer, who still had the smoking pistol in his hand when he fell.  The community erupted anyway.  So did the liberal media.

Here is a fact that we should all agree is totally relevant:  the anger on the street.  Those demonstrators didn’t get worked up about a single killing.  They’re angry about what they see as a pattern of abuse.  The Eric Garner case in New York—which is the killing that should have sparked the national outrage, not the Brown case—is a perfect example of what they’re talking about.  There is no question there about whether an innocent man died for no good reason.  Nor is there any question about whether the legal system failed to provide justice.  What led to that?  Demonstrators are right to demand answers—as should we all.  Capeheart and others like him certainly are right about that.

The issues are real.  We need a national conversation about race.  Are we having one?

Not really.  The latest so-called efforts in that direction tell you absolutely everything you need to know about why we’re not.  I’m talking about Starbucks and USA Today, of course, and their “Race Together” initiative.   The idea was that for the next few weeks or so (the time frame was not specified), baristas will hand-write the words “Race Together” on your coffee cup, and stand by waiting to see if you want to talk about race.  Because, you know, baristas are so expert on the nuances of this incredibly difficult issue (well, hey, many of them reportedly are college graduates who couldn’t get better jobs, so maybe they do know something).   In addition, USA Today printed an 8-page insert in its March 20 edition, which is also available at all Starbucks.  If distilled down to copy of normal newspaper size, minus the colorful graphics, there would be enough print to fill about one page, max.  This thing clearly is not aimed at thoughtful individuals who are interested in a detailed examination of a very complex matter.

The other thing that’s startlingly clear about the campaign is that it’s not about having a conversation, which would imply an equal give-and-take.  It’s about furthering an activist agenda.  To quote from the USA Today insert, the whole point is to stimulate “action around race.”  There is nothing wrong, mind you, with private enterprise campaigning for a cause.  Such efforts are nothing new for Starbucks, which has a track record of this kind of thing.  Nor, really, is it anything new for the so-called “mainstream media” to push a political agenda.  But it is a little out of the ordinary for such a news organization to be so open about its motives and intentions.  In its insert, USA Today promises that in seeking to address “barriers to social justice and economic equality” it will use “all of its strengths in publishing.”  Well, good on them for being honest.  The next time you see USA Today publish a news article related to race, class, jobs, entitlements, the U.S. economy, and so on, now you know where it’s coming from.  I salute that; most media still insist on having you believe they’re objective when reporting the news.

I don’t criticize Starbucks’ politics or what it’s trying to achieve; I leave those value judgments to you.  I do criticize the way it’s framed the “Race Together” initiative.  In announcing it, CEO Mellody Hobson said that we all need to start having those “difficult conversations about race.”  But in her remarks, what did she say she wants us to talk about?  She told us there were too many white men in boardrooms and not enough blacks.  That’s the primary issue here.  In addressing the topic of how executives might change recruiting practices and hiring standards to increase diversity—certainly a worthwhile and necessary goal—her answer was, “Yes!”  The question deserved a thoughtful answer.  Her glib toss-off was corporate double-speak at its finest.

When I first heard her invitation to have those difficult conversations, I was excited.  I’ve said many, many times on my radio program that we need to have such a thing.  But that is not what the Starbucks initiative is about, and I am by no means the only observer to say so.  If you are a Starbucks employee and you do think this is about having a conversation—you know, an exchange where you say something, and the other person listens, and then they say something, and you listen—try this:  go to your supervisor’s office and say something frank and direct that conflicts with the liberal agenda.   I dare you.  If you’re not a minority, I double-dog dare you.  You’ll find out real fast whether this is about conversation, as opposed to indoctrination.  Customers, try it in line at a Starbucks store, if you have the guts.  I hope you don’t get arrested.

The Twitterverse and critics alike, for the most part, have piled on Starbucks—so much so that its program of writing the words “Race Together” on coffee cups crashed and burned in less than a week, and has now been halted.  Starbucks is trying hard not to let this be framed as a failure.  In his memo to “partners” (i.e., employees) announcing the halt, CEO Howard Schultz stated that cup-writing program would be completed as of Sunday “as originally planned.”  Right.  I checked.  The initial written and video messages from Schultz did not mention an end date, and its attempt at spin is not impressing most media sites I checked, which are using words like “ditched,” “scrapped,” “oops,” “fiasco,” etc.

In a way, the failure is a shame.  We still really do need that conversation Ms. Hobson promised us—but we need one that is agenda-free, conducted in good faith, and involves a frank exchange of views, with the goal of working together toward real solutions.  We didn’t get it after Ferguson.  The Starbucks/USA Today effort utterly misfired.  But that just means the need has continued to go unmet.  And it’s very real.

Resolving these issues will be impossible unless we as a nation find a way to do what Ms. Hobson initially appeared to be inviting us to do:  have uncomfortable conversations about race.  But it will never, ever happen in the shadow of a given social agenda or in the atmosphere of political correctness such an agenda imposes.  In fact, it will only happen if all participants can be made to feel their lives won’t be over if they say the wrong thing.  That does not describe our nation today.

Is it too much to ask for community and elected leaders to step forward and find a way to do this?  We are, after all, America.  We’re oh-so-happy to tell the rest of the world how to solve its problems.   How wonderful it would be if we were to really and truly focus on some of our own, starting with this one.

If we can talk with Iran, surely we can find a way to talk with each other.

Find more of my bloviations on political issues here.