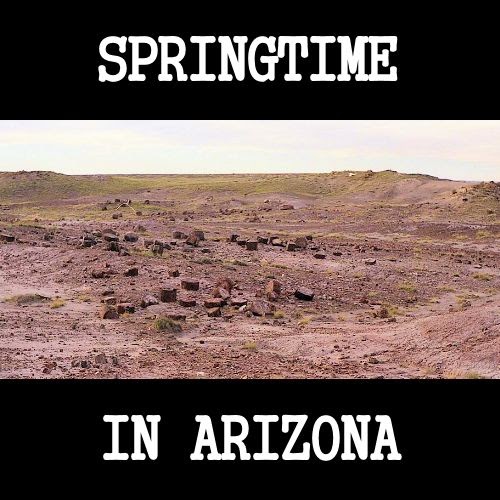 There’s one thing I really love about springtime in The Grand Canyon State.  Hang on, it’ll come to me in a minute.

Ah, the sights and sounds of springtime in Arizona.  The wind roaring through the treetops, rattling the screens, and making the eves pop and groan.  The clanging of tortured wind chimes twisting in their death throws.   The startling thuds of hapless birds slamming against the walls and windows.   Indoors, a staccato, liquid, guttural sound denotes the arrival of another hacked-up kitty furball on the nice comforter in the guest bedroom, deposited there by a joyous feline who is alive with hyperkinetic activity due to the change of seasons.   Later, she and her brother will energetically climb our fake ficus, testing to see whether it's any more stable than it was the last time, after which they’ll take turns clawing at the window screens.  It’s not a problem; that’s what security deposits are for.  Life is good.

What, you didn’t know we had seasons in Arizona?  Sure we do.  Those lucky enough to live in the higher elevations have the traditional four.  The rest of us endure Summer, After Summer, Between Summers, and Fixin’ To Be Summer.   Any planting must take place before the heat arrives, after which anything living placed into the soil will shrivel before your eyes with audible crackling noises and die cursing your name.  The yearly planting window is a very narrow one lasting, oh, about six hours.

Mother Nature fully understands that the pre-Summer planting frenzy represents humanity’s attempts to mess with her carefully thought-out arrangements, and she expresses her disapproval forcefully.  As an impediment, rainstorms would be out of the question, so she provides the next best thing, unceasing winds, of a type first described in Dante’s Inferno.

The weather page in our morning newspaper assured us all that the breezes on the Sunday of which I write would be 12 to 25 mph, with gusts of up to 31.   That’s right.  Top wind blasts of 31.  Thank you for the precision of that forecast, Mr. Spock.   For the incurable optimists who run to the paper every morning bursting with hope that the new day will be different from all those that went before, the forecaster denoted with a straight face that the chance of rain today was—wait for it—zero.  That number represents the probability of rain, of course, expressed as a percentage.  Had the forecast described instead the expected amount of rain in inches, that would number have been, well, zero.

The reality turned out to be different.  Not from a rain standpoint; that part of the forecast was never in doubt.  But the wind outdid itself.  Gusts of up to 31 miles an hour my butt.   I know there had to be an upper limit to the wind speed, if only because of the laws of physics.  Although the roaring of the gale in my ears made conversation difficult, I’m pretty sure that if there had been a sonic boom, I would have heard it.  I can say with confidence that even the strongest gusts didn’t get anywhere close to that level.  Still, the buffeting was intense.  I'm not saying that I saw a witch blow by on a broom.  I am pretty certain I caught a glimpse of a guy flashing by standing on a ladder with his paint brush still hoisted in the air.

My wife and I were out in the maelstrom because we found the need to replace two plants in our back yard.   How this came about is rather embarrassing.  Although our Between Summers season is quite mild, every now and then Mother Nature, just to be unpredictable, does let the temperature drop below freezing for a few hours.  This is not harmful to any of the native plants, but it’s bad for what some of us have been secretly cultivating in our back yards.  A frost claimed one of our bushes the season before last.  Another was severely damaged, but I trimmed the dead parts off and thought it was doing fine.

Until a landscaper happened by one day and said, “Nice weed.”

“You know that’s a weed, right?” he said, nodding at the plant I was trimming.

“Uh, no.”  I explained what had happened in the frost.

He shook his head.  “Nope.  Most people hereabouts, when they spot something like that, they dig it up.”

Well.  I will say I didn’t see what was so objectionable about my little friend.  The plant I was tending looked similar to the one that had been there before, although I will admit the leaves were a bit longer and narrower.   And it did tend to grow faster.  Much faster.   Okay, much, much faster.   But I never would have guessed anyone would consider it a weed.  What was it about this poor inoffensive plant that had earned it such an inglorious distinction?  But the man walked off before I could ask.

So, when the planting day window arrived, the wife and I bounded out of bed with the idea of getting down to the Lowe’s Garden Center ahead of the crowd.  We were just sure that because it was early on a Sunday and because the wind was so wicked, we’d have the run of the place.

The wind certainly did its part to oppose the adoption of greenery.  We had been there for less than 30 seconds when a big gust came roaring through and knocked two large plants off a shelf and onto the walkway right in front of us, missing us by about a foot.   (I’m happy to say the plants themselves seemed undamaged).   The tropical section looked like that newsreel footage you sometimes see when hurricanes rampage through Florida; the palms were all leaning at 45 degree angles, each having been knocked over into its neighbor.

But to our surprise, despite the conditions the place was jammed with shoppers.   Now, I have to say the wind does not really bother me.   My head is as aerodynamically clean as an F-35, having no follicles to present a wind-loading issue.   Plus, I was wearing a hat (which blew off twice).  But the women were in abject misery.  Talk about your Bad Hair Day.  The fact that they were all willing to subject themselves to such torture testifies as to the hollow-eyed desperation they all felt to get something green into their lives while the getting was good.

Green is coveted in Arizona, yet controversial.  The die-hards here like the state the way the pioneers found it, which is to say, not green.  I speak as a homeowner who was once busted by a neighborhood association here for letting living things spring up in my front yard, which had been reserved for gravel.  The irony made my head swim; my Florida neighborhood association had been infamous for picking on you not only about how healthy your grass was but about whether it was the approved variety of grass; rocks and gravel were something you were careful to remove from the path of your lawnmower.

But Arizona is not like the other kids.  If you see the word “Forest” on a map here, you can’t be sure they’re not kidding.   Our most famous forest actually died millions of years ago from the merciless heat and has since turned into solid rock.  Yet people still go there for picnics.  Go figure.

You can get away with installing some greenery if you do it late at night or early in the morning, and put it in the back yard where no one can see it—hence the crush of like-minded people at Lowe’s.   The bride and I snagged two bushes like the ones that had joined the Arboretum Invisible.  We really must have wanted them because the shortest of the two checkout lines had 10 people in it.  Normally I wouldn’t wait in a line that long if they were passing out free $100 bills.

The formal name for the two bushes we adopted is “Cassia Nemophyla,” which I’m pretty sure is Latin for “Cassia isn’t here anymore, and next year, this bush won’t be, either.”  We took them home and planted them with loving care.   I thought I was in trouble when, four inches down, my shovel hit what seemed like bedrock (the geological feature, not the town, although that’s here in Arizona, too.)  But it turned out to be just a big ole rock.  Thankfully, I was able to remove it without explosives, and the procedure went fine from there, with only half the plant food blowing away before I got the damned things into the ground.  After that, to keep the neighborhood gendarmes off my case I went around spraying toxic chemicals onto the leafy green things that were springing up all over the gravel pits at our house, a.k.a. the front and back yards.

Tell me again—how are non-weeds better?

Word is there’s a movement afoot to legalize weed here in Arizona.  I think I heard that on the news.   When that happens, let me just tell you, my yard is going to look very different.

I feel better just thinking about it.

Post Script:  In case you think I'm exaggerating any of this, the top officially recorded  wind gust for the day turned out to be 36 mph, and the relentless winds burned a house down.  No kidding.  According to local news reports, the wind ripped a piece of aluminum siding from a house and propelled it into a nearby transformer.  Sparks erupted, catching the house on fire.  No one was hurt, but the house will never be the same.  Fortunately, the home's garden was not damaged.

If you enjoyed this article, please share with your friends.  You can find more snarkograms here.

Also note, the Kindle version of my well-reviewed sci-fi novel A Journal of the Crazy Year will be on sale for 99 cents March 24 through March 30 only.   More info is available here.