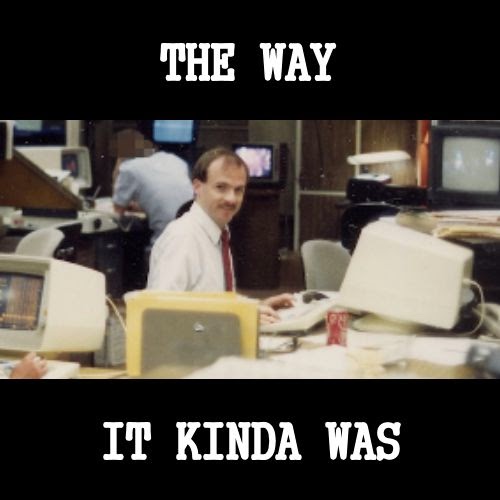 Smile and wave.  You're probably on camera.  Now, behave.

I was looking for a photo to share for Throwback Thursday when I came across this one—a shot of me sitting in a major market TV newsroom in 1988.  I won’t embarrass the station by saying in this post which newsroom it was (although I am posting it in the station’s forum on Facebook—so they’ll know.)  But it reminds me of how different things were back then.

You absolutely cannot tell the changes by way of the picture.  What do you see?  A confident, relatively young man smiling at the camera.  Yep, that’s me.  I had just turned 30.  I never thought of myself in those days as being attractive, but I’d give my chances for eternal bliss—and yours too—to look like that again.  In the wider version from which this was cropped, you can see that I’m surrounded by a couple of coworkers, and they were quite busy.  I was, too, until just seconds before the photo was taken, and then I got busy again, right away.  In that regard, TV newsrooms haven’t changed much.   There’s always too much work for too few people, and with today’s ever-shrinking news budgets that is even more true now than it was then.  (Note to “real world” employers:  this is why former TV news staffers tend to make excellent workers.  They’re used to busting their butts to meet tight deadlines and deal with shifting challenges that can, and do, change by the minute.  Silly them, they think this level of productivity is entirely normal for the American workplace).


Other things have changed a great deal.  I won’t go into a dissertation about journalism resources and ethics and all that, as I’ve already done so copiously in other places.  Even more profound were some of the cultural changes, and those you definitely cannot see in this photo.

When I walked into my first TV newsroom in 1980, I was struck by how profane it was.  I’m not saying every third word was a gd-bomb, s-bomb, f-bomb, or mf-bomb, but it sure seemed like it.  Given that, to this day, my sense of humor has never evolved beyond the sophomoric, I loved it.  When I changed jobs four years later, I wondered whether that new environment might have the same culture.  It did.  Very cool.  A good time was had by all.  Well, maybe not all.  But we didn’t much think about that at the time.  We sure would later, though.

In 1987 I got a chance to go to the Big Leagues, a TV newsroom in a top-15 market.  That is the television industry equivalent of what professional baseball players would call “The Show.”   On making this transition, it naturally occurred to me that the professionals in such an environment might be more, well, professional in their demeanor.  More staid.  Less prone to obscene outbursts.  Less accepting of such behavior.  I worried that I and my by-now totally corrupted potty mouth might not fit in.

I walked into that big-market newsroom in November of that year and stood in the very spot from which the photo was taken, with the thoughts I just outlined flowing through my mind.  I had only just arrived when someone shouted out with an angry exclamation.  The voice came from a tiny little desk in the far left corner of the newsroom that I could not even see from where I was standing because it was hidden behind a partition.  But this barrier in no way muffled the clarity of the speakers’ voice.   At the top of her lungs, she vented her annoyance over some on-the-job frustration, setback or obstacle, with the words, “F*&% ME!!!!!!”

Did I mention that I’d been standing in that newsroom as a new employee for only about a minute at the time?

Mentally I did a fist-pump and thought, “Yes!  I’m home!”

And that’s the way it was, for a short while longer.  We cussed.  We told dirty  jokes.  We said things out loud that make me blush now just to think of it.   No one objected.  The women seemed to enjoy it as much as if not more than the men did.  They certainly did their fair share of participating.

Of course, some did not enjoy it but chose to suffer in silence and say nothing.  We finally heard from the quiet contingent in 1991.  That’s when Anita Hill testified before Congress on live TV about what Clarence Thomas had said regarding the unwanted item lying atop his Coke can.  (For those of you who were not around at the time and don’t know what I’m talking about, I urge you to look it up; it’ll be good for your soul.  Here—I’ll make it easy for you.   Follow this link).  You can get hauled before Congress for saying that?  Really?  Oh.  My.  God.

And thus the party ended.

Fast forward 25 years.  Now we live in a nation of finger-wagging scolds.  Your behavior is under scrutiny at all times, in practically all places, by societal forces just dying to call you out and make an example of you.  The 21st century has brought us a world of technological advancement where all of us are monitored even more closely than George Orwell imagined in his classic novel, 1984.  Cell phones, with photo and video capability, are everywhere.   Security cameras are in just about every public space.  Many employees are subjected to audio, video, and email surveillance in the workplace; as the National Workrights Institute puts it, “The battle for workplace privacy is over; privacy lost.”

You might think that you at least have a reasonable expectation of privacy if you are in your own house, but some have found the hard way that even that’s not true.  All it takes is one “friend” with a cell phone surreptitiously recording you doing or saying something that might offend public sensibilities, and you’re done, no matter who you are, or think you are.  And while they’re running you the hell off, no one holding those pitchforks and torches will shed a tear about your invaded privacy.

When in public, you must now assume that you are on camera and are only one button click away from being on the Internet at all times.  Does your apartment or office building have an elevator?  Wave and say “hi.”  And behind every one of those cameras is a low-paid security employee just itching to find something worthy of posting to the Twitterverse.   When that happens, you may well find reporters from coast to coast demanding your job for something as egregiously offensive to the public mind as, say, jerking a dog on a leash.   It doesn’t even matter whether your behavior rises to the level of meriting some kind of criminal charge.  But it definitely does matter whether video or audio is involved; in such cases, the good old fashioned “gotcha” rules of lurid sensationalism that we all learned from tabloid TV years ago apply in a way guaranteed to make you watch or click on an item that wouldn’t even have made the news at all otherwise.  This issue is so prevalent that I’ve become convinced the Internet now exists for two purposes, and two purposes alone:  cat videos and public shamings.

Has the dramatic reversal in behavioral expectations, and the attendant intrusion into our lives by government and by our peers, made us a better society?  Or a worse one?  I leave that judgment to you.

But I think we can all agree, it sure is different.

In my novel Messages, I write in detail about how TV newsrooms used to be—and how the seeds were sown then to make them what they are today.  I invite you to check it out (read reviews and reader comments, download a free sample chapter, and see purchase links for the print and Kindle versions here.)

If you enjoyed this, please share with your friends.  And I invite you to subscribe to this blog.