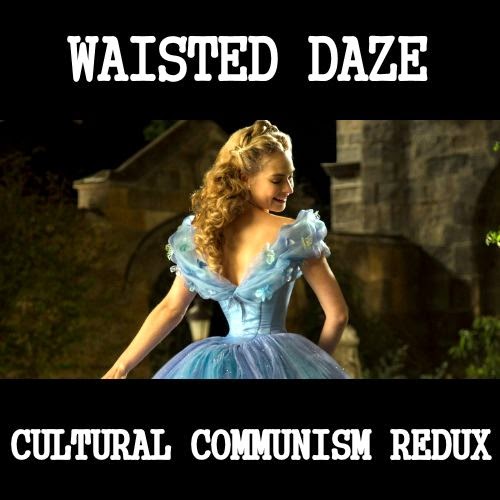 Who would have guessed some would find this movie offensive and even dangerous.  But they did.  Here’s why, and where we’re going with all this.

In my capacity as a local radio bloviator and as an experienced journalist I pride myself in my ability to spot and dissect media trends.  But I’m just going to say it:  If you had asked me to review a list of motion pictures slated for release in 2015 and pick the ones most likely to offend, the word “Cinderella” would not have crossed my lips.

For missing this one, I offer no excuses.  I beat my gums all the time on the radio about the social media’s flaming Outrage Industry, onto which the mainstream media regularly and cheerfully poor gasoline.  They do so in the sure and certain hope that news consumers, like lab rats pressing a food pellet lever in response to a blinking light, will click on these stories or watch them, thereby doing their part to pad the bonuses of media executives.  And they do, with predictable and profitable regularity.

Even so, I completely overestimated the current threshold for apoplectic outrage.   In my defense, I’ll only say that who would have thought that a traditional, 400-year old fairy tale, writ large in a big-budget, family-oriented movie, produced by the most wildly successful family entertainment business ever, and garnished with a happy ending, would have offered anything to offend?


The trouble started a few months ago when Disney released the movie poster.  Among those raising the first alarms was a fashion website called The Gloss.  Samantha Escobar’s headline screamed breathlessly, “Did Anybody Notice How Photoshopped Lily James’ Waist Is?”  Escobar offered no proof of her accusation that the photo had been “digitally altered” and presented no sources for it.  But that didn’t stop her from pointing fingers at what she called an “overzealous photo editor.”  And she didn’t stop there.  The deception, she said, not only was “unnerving” but “damaging”—her point being that now children will believe that real-life people can, and should, look that way.

The Twitterverse, as it is wont to do, erupted.  Many (but it should be noted, not all) responders flatly agreed the photo had been altered and that this deceptive act by deceptive deceivers was dangerous, irresponsible, and reprehensible.  “Poppy” tweeted:  “Horrified by crazy CGI of Lily James' waist in #Cinderellamovie, so bad for young viewers' body image & unnecessary.”  My favorite tweet was from Gaby Dunn:  “I'm gonna CGI myself giving this movie a big middle finger.”

As the release date of the motion picture approached, the uproar intensified.   Actress Lily James denied anything had been altered, and called the controversy “sad.”  Everyone connected to the production loudly insisted there had been no CGI or animatronic funny business.

Yes, James had been in a corset, they admitted.  Of course she had.  Cranked so tight that her feet swelled and her eyes bulged.   Director Kenneth Branagh pointed out to the Huffington Post that the dress at issue had a  dramatic flair right at the hips, and actually said out loud that a lot of Lily had been forced down past it, out of sight.  “Basically you squeeze things in,” he said, and “things come out at the bottom, you know?  And it all gets hidden under there.”

So, what we’re left with is that a team of studio technicians squeezed poor Lily into the thing, quickly ran off some footage of her smiling, dancing, and pretending to enjoy herself, and then rushed to spring her from the contraption before it could cause permanent organ damage.  But no fancy special effects were used.  Because that would have been cheating.

Did that tamp down the controversy, do you think?  What, you do?  Ha.  Silly you.

HuffPo host Caroline Modarressy-Tehrani told Branagh, “There's all this talk about body image.”  And then she asked, “Do you think there's a place for that kind of conversation when you're talking about a big-budget film like this?”

Branagh allowed as how there is, but then called the flap a "non-story."  And in the next breath he felt compelled to add this:  “Do I feel it's dangerous what this is doing?  No, I don't think so.  The film is responsible.”

In case you missed the significance of that statement, let me underscore it for you.  We now live in a world where the director of a major family-oriented motion picture has to publicly deny his that film is dangerous for having placed an attractive actress in the lead role.

Branagh also pointed out that Lily James is not the only star in the film and that it’s stuffed  (okay, my use of that word is a bit snarky in this context—sorry) with human variety.  “If you look at our ball, it's full of diversity.  It's full of every kind of shape.”

Yes, but let’s bring on some real here.  James is the star.  She’s the one in the posters.  It’s her body image that will live in the minds of our little girls and young women.  And it will scar some of them for life.

Concerns about the portrayal of unrealistic body images are nothing new; witness the flap over the Barbie doll, which has a waist some analysts assert would require humans to remove ribs and/or some internal organs to achieve.  But recently the movement has been spawning attacks against people who are perceived as beautiful, and against those who promote beauty.  Case in point:  Recently a couple of college students in Britain became outraged (there’s that word again) over a Victoria’s Secret ad campaign.  Not only did the promotion feature svelte young models cavorting in their skimpies, but the ad featured the words “The Perfect Body” in big, black letters.  Really?  It did that?  Yeah.  The two offended students started a Change.org petition, which resulted in mass media coverage.   Of course it did.  Change.org petitions often do—if, and only if, reporters perceive the cause in question to be progressive.  Petitions with as few as 75 signatures have resulted in national coverage.  This one garnered tens of thousands.  Satirists produced a mock ad featuring a variety of women, not all of whom rise to the traditionally accepted standards of idealized beauty.  Victoria’s Secret caved.   It didn’t insert plus-sized models into the ad, but it did change the title.

Now, I don’t know about you, but I’m a heterosexual male who has always liked women, and I really do believe you can find features to praise in most of them.  Maybe that makes me an enlightened, happenin’ 21st century kind of guy.  Maybe it just makes me an old-fashioned traditional values horndog.  But let’s face facts.  The human species exalts the young and beautiful.  Ever has it been thus.  Is it reasonable to expect that to change?  Ever?  Do the finger-wagging scolds demanding that we all alter our thinking and behavior have a right to do so?  More to the point—I won’t name names, but pick your favorite plus-sized actress.   Can you see her as Cinderella?

Maybe you can.  I make no value judgments and do not propose to tell you how to think.  But I offer one observation and two suggestions.

Observation:  The prince in Cinderella is pretty hot, too.  I don’t hear anyone, male or female, complaining about that.  If we are going to go down this road, we need to do it from a standpoint of gender equality.  Personally, I find the male body image projected by Richard Madden and those like him to be very damaging to my psyche.  In fact, all my life I have struggled with the fact that I have never possessed chiseled movie star looks, idealized washboard abs, or any of that kind of thing.  I have found that many women, their minds corrupted and poisoned by the ideals of male attractiveness that society has foisted on them, are put off by that.  This has at times crushed my spirit.  Guys, raise your hand if you, too, have been effed up damaged for life by society’s unrealistic and unreasonable notions of ideal male beauty.

And I absolutely do know how Lily James feels about the contortions one must go through to meet those standards.  I have felt her pain, and I mean that literally.  Just a few days ago, I pulled an old pair of jeans out of the closet, determined to squeeze into them again.  I did.  I’m wearing them right now.   My eyes are about to pop out, I’m constipated and I’m pretty sure I’m starting to suffer from deep vein thrombosis in my legs.  But the pants are on.  This is due in part to the fact that Levi uses metal rivets in the key stress points.  Now I know why they do that.  I feel pretty good about my accomplishment, but I do urge bystanders to keep a safe distance.  If one of those rivets goes someone could get hurt.

So here’s my first suggestion.  One, we could all decide to agree that the social activists here are right, and that we must tackle this problem head on.  As the issue pertains to motion pictures, in the name of equality the only fair thing to do is to end the whole star system.  Going forward, we must require casting directors to choose actors and actresses by lottery, without regard to physical characteristics.  That’s the only way to ensure that no particular body image gets held up as ideal.  No, I don’t expect Hollywood to do this willingly.  I suggest that we start with legal action.  People are getting hurt here.  Someone has to pay.  And we know where the deep pockets are.  Legislation may have to follow.

Or, barring that, us non-movie star types could all just quit our whining and accept the reality that the human experience is what it is, with some of us possessing certain gifts,  others possessing different gifts, and most of us wanting things we ain't got.

My prediction?  I’m tempted to say we’ll muddle on as we always have, forcing ourselves to endure the resulting angry Greek choruses of outraged special interests, of which there is never any shortage.   But I called this wrong the first time.  And the ACLU will sue absolutely anybody over absolutely anything.  Just sayin’.